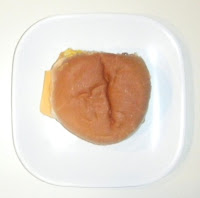 The subject
The original McDonald's menu--which you can see here--includes just two main entrees; you got your choice of a "Pure-Beef Hamburger" or a "Tempting Cheeseburger," then you'd add some fries on the side. The other six menu options are beverages. You could buy one of everything on the roster for $1.24.

Half a century after Ray Kroc exploded the franchise, the McDonald's menus boast a staggering array of sandwiches, salads, beverages, and other food items, and they're also just one restaurant on a crowded fast-food landscape. Taco Bell, Subway, Popeye's, KFC--a lot of companies have grown to worldwide prominence by feeding people crap food. While Burger King flame-broils their burgers (more fat drips off during cooking than frying), their food still isn't good for you. Not by a long shot.

Speaking of "shot," we picked the new Burger King Burger Shot to get the bacon-wrap treatment--mostly because we feared consuming a gargantuan Whopper wrapped in bacon might actually kill us. 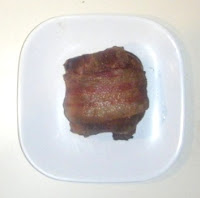 The result
The bacon-wrapped Burger Shot, if it isn't the most delicious experiment BDJ Labs has conducted so far, it's right up there. The salty note of bacon, the savory meat, and the tangy pickle--the flavors combined into a symphony of awesome. During the consumption part of the test, nothing could be heard in the kitchen except happy munching sounds emanating from the mouths of lab staff. The bun soaked every last gram of delicious bacon grease, so we wouldn't advise eating more than one in a sitting. However, if you're planning a bacon party, we recommend you ensure bacon-wrapped burger shots are on the menu.