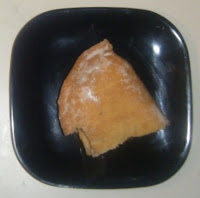 The subject
Hostess fruit pies are lunch treats that demand to be taken seriously. They're so big and unwieldy, it's a wonder that the average schoolkid can lift one (he can--he just might need a couple friends to help). The heft of a fruit pie, though, is nothing compared to the caloric content--a single Hostess apple pie (like the one we tested) contains 470 calories, roughly equivalent to the count of a half stick of butter, with some sugar sprinkled on top for added flavor--and about as nutritious.

For this test, we cut a pie in half and wrapped it in two strips of bacon. 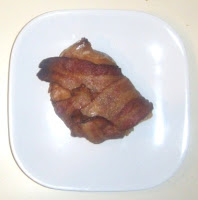 The result
Remember when McDonald's used to fry their delicious apple pies, rather than baking them? The crust would crumble in your mouth, in a delicious avalanche of starch and fat, right before the molten-lava apple filling would scorch your mouth? That's what this test turned out to resemble--with the added delight of bacony goodness added to the flavor explosion. We would have consumed the entire sample, were we not afraid our cholesterol levels would skyrocket to life-threatening heights. Instead, we savored a few bites of the fat-laden morsels before sliding over to the BDJ Labs assistants. The only thing we can think of that would improve the test would be if we stuffed bacon into the pie before baking--however, that is something we don't recommend trying at home without your cardiologist's permission.