Note: BDJ Labs is happy to be back online after successfully quelching a particularly nasty virus attack (we suspect vegan terrorists). 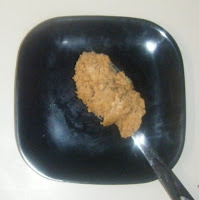 The subject
The great George Washington Carver was responsibles for scores of agricultural innovations, including encouraging farmers to rotate crops to reenergize soil depleted by cotton. He reportedly came up with more than 100 uses for peanuts--ranging from cosmetics to fuel--yet it's the relatively simple concoction peanut butter that we remember for. Perhaps for good reason--the mash of goobers makes for a protein-packed sandwich that fuels school kids and BDJ Lab scientists alike. Elvis' reported favorite edible was the artery-busting fried peanut butter/bacon/banana sammich. We're big fans of The King--however, his judgment has been off before (see the Bedazzled jumpsuits on display at Graceland), so we wanted to see for ourselves if the PB/bacon combo was worthy of our burnin' love. Rather than the highly processed, chemical-laden Jif or Skippy variety, we opted for the natural variety--nothin' but nut. 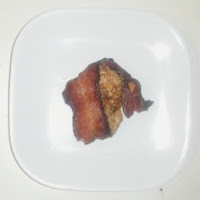 The results
We carefully formed the PB into a small log shape for optimal bacon wrapping, and applauded ourselves for our choice of natural 'butter--the commercial brand stuff would have been impossible to wrangle, and probably would have melted into a burned mess in the oven. While the natural peanut butter did expand a little (see not-very-attractive result photo), it stayed in one contiguous piece, more or less, and didn't morph into a black puddle. The peanut butter actually fluffed up and took on a more paste-like consistency than it had in its pre-baked state, and the flavor was more savory than sweet. With the smoky flavor of the Nueske's bacon capping it off, the morsel reminded us of those nuclear orange cheese/PB crackers--only way, way better. If we could improve our bacon-wrapping skills so that the PB maintained its log shape post-oven, we could definitely see ourselves serving these morsels at the next BDJ Labs social gathering. Also, the whole shebang would be super-awesome dipped in chocolate.