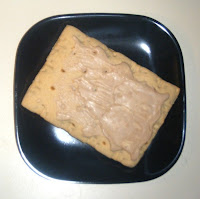 The subject
When the grownup scientists at BDJ Labs were Garanimals-clad tykes, our mothers very rarely, if ever, procured these sweet breakfast treats from the grocery store. For good reason, it turns out: They're about as nutritious as the roofing shingles they closely resemble. The fruit filling has hardly anything even vaguely fruitlike in it, and we can't begin to imagine what the frosting consists of. As we aged, though, the forbidden treats gained appeal, and when we reached college age, we would purchase them for ourselves. A warehouse-size package of the strawberry-frosted variety fed one of our scientists for an entire week her senior year, and she would have kept on eating, had a Pop-Tart not jammed in her toaster, causing pretty blue-green flames to shoot out the top and take out a roll of paper towls. After that, she was too afraid to eat them for a while--until she figured out they're almost as delicious untoasted.

After hearing of the Pop-Tart blaze, we were almost too afraid to conduct a test that involved subjecting a toaster pastry to high heat for an extended period. However, we ignored our trepidation and pushed through it in the name of science...and bacon. The toaster pastry we wrapped with five strips of bacon was of the brown sugar/cinnamon variety, and we opted for the added-fiber version. Might as well get some health benefit from this. 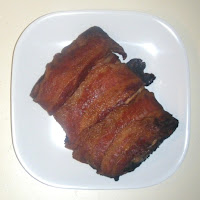 The results
The test subjects coming out of the BDJ Labs oven continue to surprise and delight us. We'd fully expected this experiment to turn out a burnt, inedible mess--something even our hardy lab assistants would be loathe to touch. However, we couldn't have been more wrong; the results were nothing short of fantastic.

True, bacon-wrapping a rectangle of chemical-rich pastry won't do much to improve its nutritional value. Let's do the math, shall we?
That doesn't sound TOO terrible--until you take into account that the bacon normally drained from the strips soaked right into the pastry, and a strip of bacon loses half its fat and calories through cooking. Therefore, the end redult is closer to about 530 calories and 34 g fat.

Amazing as the fat/calorie payload was, the taste of the final test was even more so. The grease that had infiltrated the pastry caused it to expand and fluff up, creating a cakelike consistency. As it turns out, the brown sugar of the filling complemented the bacon perfectly, and we silently congratulated ourselves for making the perfect Pop-Tart selection for this test.

However, were we to repeat this test, we would change two things:
Even so, we at BDJ Labs have declared this our most successful test yet--one that we would repeat at home, and possibly serve to guests at a bacon-themed party.