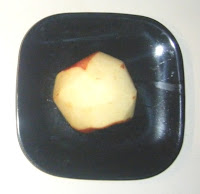 The subject
An apple might not look like much, but it's a tasty, nutritious, and super-versatile little food. Our personal favorite utilization for an apple is to slice it up with a few of its brethren for immortalization in a lattice-top pie. However, that's too much effort, so we usually just slice the thing up (maybe sprinkled with a little cinnamon, or even salt) for a simpler munching experience--or just crunch into the entire orb. If we weren't so lazy, we could use our stash of apples to make applesauce, apple butter, apple muffins, apple crisps, baked apple, apple chips...the list goes on.

However, one way we've never had an apple: wrapped in savory bacon. For this test, we cut a peeled Gala apple in half, wrapped it in two slices of Oscar Mayer bacon, and baked. 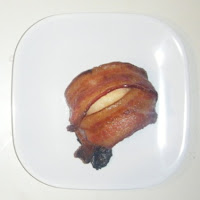 The results
This test subject certainly came out of the oven looking pretty--the bacon came out a delicious balance of crisp and chewy, and just a little slit of apple peeked out between the two strips. Tasting it, we weren't disappointment. The apple had shrunk just a little, leaving it with concentrated sweetness, and the consistency was soft, but not too mushy. Had we sprinkled the apple with cinnamon before baking, it would have tasted like an apple pie in a tasty bacon crust. We actually might try that in our home labs in the near future.

Sunday: This week's Bacon Bit
Monday: Bacon and onion
Posted by Spinner at 9:56 AM