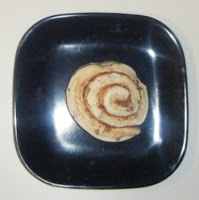 The subject
Fresh, homemade cinnamon rolls are beyond delicious, yet they're a huge pain in the tukis to make--mixing the dough, kneading, waiting for it to rise, rolling it out, yada yada yada. Then there's the prepackaged, already-baked variety--edible only if you're lucky, and never as droolworthy as homemade.

Smack dab in the middle is the refrigerated cinnamon roll. They offer the benefits of homemade (warm right out of the oven, yummy aroma permeating your abode, decent flavor)--but without the hours of messy labor. Plus, the can explodes and makes that cool "thwock" noise when you open it. We're fans, and thought the prefab awesomeness of the treat could be made even better with bacon. 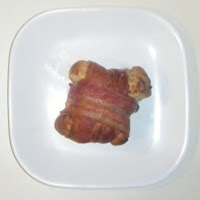 The result
Oh, my goodness gracious--call the results of this test craveworthy. We feared the cinnadough might have been rendered beyond mushified with all the bacon grease soaking into it, but praise Jeebus, it didn't. Instead, the dough became crunchy, and the bacon cooked perfectly, over and under the dough (rather than blackening on the bottom from all the sugar). We've had fresh-baked cinnamon roll and crisp-cooked bacon on the same breakfast plate before, but now, thanks to this wildly successful BDJ Labs test, we can have them in the same bite--and we recommend you do the same.