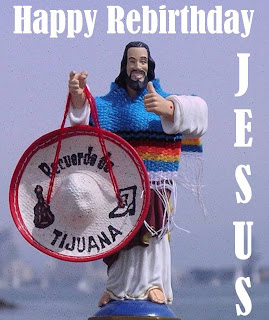 In honor of the impending anniversary of Jesus' resurrection, BDJ is celebrating the next seven days by wrapping special treats associated with the season...in BACON! We're not sure if J.C. and his posse noshed on bacon at the Last Supper, but if it had been on the menu, maybe Judas wouldn't have been such a douchebag and narc'ed on Our Lord and Savior for a few measly pieces of silver. Then again, if THAT had been the case, Jeezy Creezy wouldn't have died for our sins...so it's kind of a draw.

Anyway, in the days leading up to Jesus' rebirthday, we'll be doing some special stuff--keep your peepers peeled, yo.
Posted by Spinner at 9:57 PM