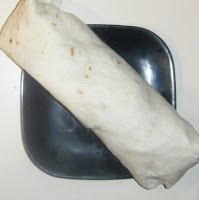 The subject
Taco Bell's 7-Layer Burrito is ungodly huge. I mean look at that thing--it could feed an African village for two weeks. No wonder Americans are fat (BTW, you should go look at This Is Why You're Fat--those guys RULE)--we eat stuff like this on a regular basis. This overstuffed wonder packs rice, beans, three cheeses (cheddar, pepperjack and mozzarella), shredded lettuce, tomatoes, reduced fat (why bother?) sour cream, and guacamole in a flour tortilla. Calories: nearly 500. Fat: 17g. Not good, but positively fabulous when you consider the taco "salad" has 45g of fat--and when the fat content of a salad has the staff of a friggin' bacon blog saying "Day-amn!" you got problems.

Anyway, we decided to wrap the 7-Layer Burrito in four strips of bacon. No, we don't know what we were thinking, either. 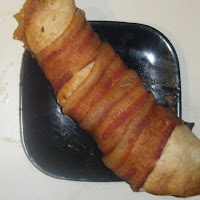 The result
The photo at right is seriously cleaned up, so as to protect our more delicate readers. That thing came out of the oven looking like a horror show--the filling pooped out of both ends of the burrito during baking, then turned into a brown/black mess. It was hurl-inducing, and you deserve better than that--hence, the photo edit.

Thankfully, the flavor result was a stark contrast to the test subject's sheer buttugliness. Because the filling had skedaddled, the ratio of bacon:tortilla:filling was fairly even and pleasant--the bacon was perfectly crisp-cooked, the tortilla crunchified, and the filling didn't overwhelm. Still, there's no way on God's blue marble that a human being should eat one of these by herself--between the heavy, already-fat-laden filling and the added heft of the bacon, no arteries could stand the pressure. Feel free to share with a fellow bacon-lover, though, at your own risk.

The conclusion: Bacon + 7-Layer Burrito = good, but too damned much