Soft pretzels--or "hot pretzels" as they're often called--are a concession-stand staple. Being one of the cheapest (and, nutritionally, least offensive) items at your average ballpark, they're also one of the most popular--when your brats beg for a treat 10 minutes into the first inning, you won't go broke giving in to shut them up. The basic pretzel is bland dough sprinkled with kosher salt, but you can get them filled with pizza toppings, coated with cinnamon-sugar, or drizzled with chocolate. For the first time this year, Cubs fans visiting Wrigley can buy a giant 4-lb. pretzel, which comes in a pizza box with various dipping sauces. We like ours with regular yellow mustard--but would we enjoy a soft pretzel with bacon? We had to find out. 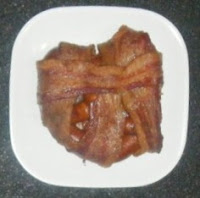 We at BDJ Labs are having what we wish the Cubs would have more of: a winning streak. We had to use a frozen pretzel, and from past experience, whether we microwave or oven-bake them, they're never as delish as the steam-heated pretzels at the ballpark, movies or Target. Bacon-baking, however, proved to be just the trick in getting the home edition of the hot pretzel to meet and surpass the taste level of their concession-stand counterparts. The bacon flavor permeated the dough, but didn't make it too super greasy, which created a nice consistency. If Wrigley Field offered a giant bacon-wrapped pretzel in a pizza box, the Cubbies' all-too-frequent losses would be easier to endure.