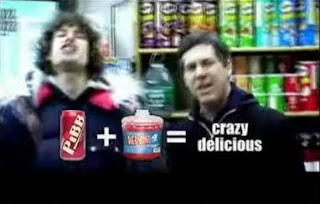 The subject
Screw you, Twizzlers--Red Vines are the king of red licorice. They're chewier, taste the way red twists are supposed to (seriously, strawberry??), and they're just plain cooler. I mean, Andy Samberg and Chris Parnell ain't never given an SNL shoutout to no punk-ass Twizzlers, my friend. Almost as good as the Red Vines taste is the smell. Mmm, baby. If they sold Red Vines air freshener, we'd totally be all over that shiznit, rollin' deep in the BDJmobile wit da aroma of tasty twists around our phat heads. [imagine these next two lines rapped] We love our Red Vines and ya know we ain't FAKIN'/So we wrapped a twist up with some muthaf*ckin BACON. 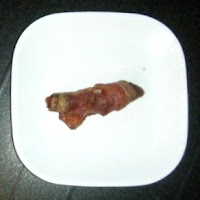 Well, turns out, bacon + Red Vines = not so crazy delicious. I think the word we're looking for to describe the result here is "weird." The flavor wasn't bad--it was the texture that had us buggin. The Red Vine lost all its chewy goodness and turned into a puddle of gelatinous goo in the middle of the crispy bacon, and the combo was just...wrong. We might try cooked bacon with an unheated Red Vine sometime in the near future, but we won't be repeating the bacon-bakin treatment anytime soon.