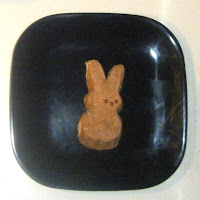 The subject
Look at this poor, unsuspecting Peep--it has no idea what's about to happen to it. On the one hand, we kind of feel sorry for the about-to-be-bacon-baked adorable confection, but on the other hand, it's not like we're new to Peep torture. Head BDJ Lab tech Jenni, for example, has by her own count put hundreds of marshmallow Peeps (both the bunny and the chick kind) to their doom through microwave torture. You could head over to YouTube.com and search "microwave Peep," but it's much more fun to do it yourself--just put a Peep on a 'wave-safe, Pam-sprayed plate, cook for about 0:45, and watch--it's awesome.

Since Peeps are our favorite Easter treat, and they perform so well in the microwave, we wondered how they'd fare if shrouded in bacon. We took one chocolate mousse-flavored Peep and put it to the test. 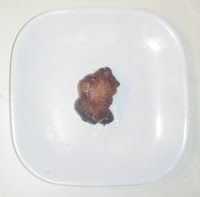 The result
You may look at the "after" pic at right here and ask, "Where'd the Peep go?" The answer--it melted, pooped out the gaps in what we thought was impeccably wrapped-around bacon, and turned into a blackened, noxious mess on the baking sheet. What was left was a shriveled little husk of bacon--slightly tasty (the lingering sweetness candied the meat), but mostly disappointing. Maybe if we'd pre-baked the bacon in the microwave? We decided this test isn't worth repeating--don't want to waste bacon.