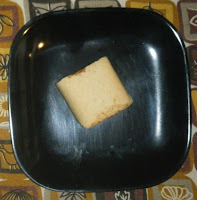 Fig bars (the generic of the infamous Fig Newton) get precious little respect as a cookie. Instead of an Oreo's pristine creme filling, they're loaded with a poo-brown goo. They're not cute and round, like most cookies--rather, they're flat and dumpy. However, if you can get past the underwhelming appearance and actually try one, they're pretty awesome. Fig bars are pretty much the Susan Boyle of the cookie world--which is why we chose them to receive the honor of being wrapped in glorious bacon. 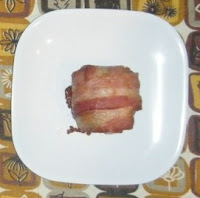 Well, color us disappointed, and kind of surprised. We'd anticipated that the sweetness of the fig would be amplified (as often has happened in the past with sweet, mushy things during the bacon-baking process), the cake part would fluff up with bacony goodness, and the whole thing would be seriously yumworthy. Not so much. The fig flavor fell flat, and the cakey part got kind of gritty, for some reason, with not much bacon goodness seeping into the fig bar's innards. The finished subject was neither good nor horrible, just kind of eh--definitely not something we'd repeat.