This just in from Agence France-Presse: 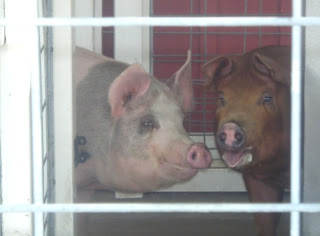 Starting on Monday and for the next six weeks, the four little piglets will be followed by live cameras and their private lives splashed across the Internet, all part of a marketing ploy by a local food fair.

The goal is to be named "Super Pig".

The town of Helfenberg in northern Austria is organising its third annual Speck (German for bacon) Spectacle in early June and Pig Brother is just the appetiser.

Each week, viewers will get to vote for the "Favourite pig of the week" and each Sunday, the little porkers will have to take part in Pig Olympics to gather the points needed to win.

True to reality-show format, the piglets - philosopher Pauli, diva Piggy, friendly Lilly and courageous Fredi - will be filmed non-stop for a month and a half as they eat, sleep and roll themselves in the mud.

And like true stars, they even have their own web-based diaries.

Curious viewers and pork enthusiasts can register at www.pigbrother.at and - who knows - might even bring home some bacon, in the form of a basket of treats and tickets to the Speck Spectacle.
Posted by Spinner at 8:02 AM