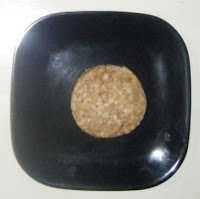 The subject
If the world were suddenly plagued by a global bacon shortage, we'd be devastated. However, until our beloved salted pork strips returned to plentifulness, we'd probably be able to comfort ourselves reasonably well with Jimmy Dean's hot-and-spicy patty sausage. We deeply dig the zing that the spices add to the pork--just enough to clear your sinuses while you're enjoying your hearty breakfast. The staff at BDJ Labs is so fond of these meaty discs of deliciousness, we thought they'd have the gumption to stand up to the bacon treatment. 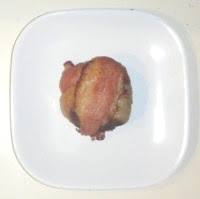 The result
The savory sausage went toe-to-toe with the smoky bacon and fared admirably in the contest. The balance between the two was perfect. The one possible negative--and it's a small one--is that the grease of the sausage, normally drained after pan-frying, was sealed in and magnified by the bacon and its grease. The firm, slightly crunchy texture of the sausage suffered, an effect that abated when we did a second test (the first repeat in BDJ's storied history) in which we first cooked and drained the sausage before bacon-wrapping it. Sure enough, the texture of the sausage was restored to greatness, making this one of the most successful and tastiest BDJ tests yet.

The conclusion: Bacon + sausage = a big pile of meaty goodness