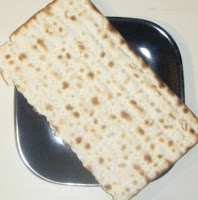 The subject
First of all, the shiksas and shaygitzes of BDJ Labs are deeply sorry for this test, and we would like to apologize to all the Jews of the world for using bacon to befoul the Official Snack Cracker of the Chosen People. We're probably hellbound for all sorts of other offenses that the G-d of the Torah frowns upon (eating bacon, for example), so we figured this wouldn't make much difference to Him in the grand scheme of things.

Secondly, we'd like to remind everyone else that you don't have to be Jewish to munch on matzo--they're an awesome blank canvas for all sorts of foods and appetizers. Cream cheese and lox, peanut butter and jelly, whatever--the Shingles of G-d are hearty enough to stand up to whatever condiments and toppings you choose to put on them--in that respect, they kick your gentile saltine's tukis. We were certain that a matzo would stand up to the bacon treatment... 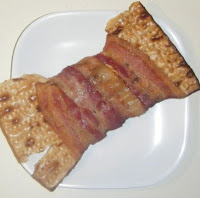 The result
...and we were right. We only used two strips on half a matzo, because we were on the last strips of the package and didn't feel like opening up another (we're lazy--sue us), so a little matzo poked out of the bacon on each end. That lazyass move turned out to pay off--not only did the bacon pinching in the middle create a cute matzo bow tie (see pic), the ends of the matzo were exposed to just enough bacon grease and oven heat to make 'em super-crunchy and flavorful. The bacon-touched matzo was even better--unlike other snack products we've tried that wilted pathetically when touched by bacon (we're lookin' at YOU, Doritos), the matzo under the bacon stayed crispy-crunchy while taking on a healthy dose of bacon flavor and grease. We're hoping this snack is served in the section of Hell we're sent to post-death--although we hear that Jews don't believe in Hell, so guess we'll just eat these now.