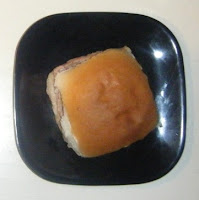 The subject
Founded way back in 1921 in Wichita, White Castle is America's oldest national burger chain. Fun fact: Restaurant No. 8 in Minneapolis was modeled after Chicago's very castle-ish Water Tower, and the motif continued through to the logo the company uses today. The guy that started White Castle, Walter Anderson, is credited with creating the fast-food assembly line still used in restaurants today--although Mr. Anderson's insistence on using fresh ground beef has been supplanted by frozen little wafers of meat. The cooking process is called "steam grilling," which sounds kind of healthy, doesn't it? Yeah--no.

While the Castle's wee little sammiches have a reputation for being heavy on the grease (not helped by the company calling them by their trademarked name Slyder), they're not that evil--only 140 calories apiece, roughly the same per ounce as a McDonald's or BK burger. When you wrap a Slyder in bacon, however, the cal count goes up just a tad bit. 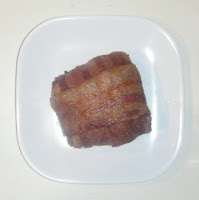 The result
Dear Lord in Heaven, why couldn't you have made vegetables taste this good? If only we didn't have to worry about our arteries, cholesterol, or waistlines--we'd sit around munching on bacon-wrapped Slyders all damned day long. Sadly, because the bacon-bakin' caused the already fat-slicked bun to soak up every delicious drop of grease from the strips, existing on a diet of nothing but bacon Slyders would not be possible--rather, it would be near suicidal.